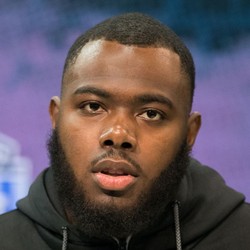 He's built exactly like you'd want a LT. He's a bit on the heavier side than athletic, but he's a bully. Quick for a big man. Understands when he falls behind and needs to bail on the footwork. Tries to multi-task, won't pretend he doesn't see someone, even if it's while blocking another guy. Better against the pass-rush than he is with the run, though both are strengths. Love the effort he gives on seemingly every play. Constantly watch edge rushers run into a brick wall. He's better against power than speed. Does a good job recognizing stunts and knows who to pick up.