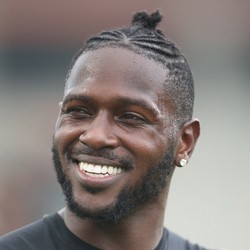 Antonio Brown works out with Dwayne Haskins in Florida

Free agent WR Antonio Brown posted a video of him working out with Redskins QB Dwayne Haskins and Chad Ochocinco in Florida on Wednesday.

Because Brown is currently a free agent, the NFL has not taken any disciplinary action against him for his misconduct over the last couple of years. If he were to sign with a team, the league could decide to suspend him accordingly, but that is of course yet to be determined as he tries to work his way back into football shape enough to where a team is willing to give the controversial receiver a chance. Even though he’s seen working out with Haskins, there have not been any rumors of AB to Washington. Brown remains hopeful to play in the NFL at some point in the future.

Deposit $10 at a DFS partner site you have NOT played at and get a FREE 6 Month HOF Subscription!
Claim Offer
Who Should I Draft?
Most Accurate Experts
for Antonio Brown
Consensus Rankings
View All Rankings
Do Not Sell
Are you looking to contact Customer Support about a subscription or account related question?
Yes
No, I'm a California resident looking for the California Consumer Privacy Act form