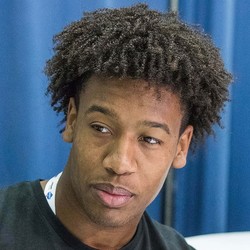 Antonio Gandy-Golden rated out very highly for me in the pre-draft process and I'm going to stick with it here in this landing spot. While the 4th-round draft capital may have some people scared off, we have to remember that AGG is coming from a FCS Division 1 school and teams weren't going to be drafting a WR like that highly. However, if AGG went to a school like Alabama or Clemson, I believe he has the talent level that would've commanded a high 2nd-round NFL Draft pick. AGG lands in a great spot due to very little competition for targets. He's the only WR drafted and selected by this coaching regime and he should be on the field right away in 2-WR sets. AGG's going to be fun to watch in Washington and he needs to be someone you circle going into your Dynasty rookie drafts.

Antonio Gandy-Golden had COVID-19, but was asymptomatic and has recovered

Redskins fourth-round draft pick WR Antonio Gandy-Golden tested positive for coronavirus during pre-draft training, but was asymptomatic and has since recovered and overcome the virus.

Gandy-Golden tested positive for COVID-19 during his pre-draft training on March 24. Although he was asymptomatic, he self-quarantined for 14 days and was fully cleared of the virus by April 7. Per Gandy-Golden himself through his agent, “I feel 100% now and can’t wait to get on the field for the Redskins ASAP!” The former Liberty WR figures to compete with Kelvin Harmon and Steven Sims in Washington for the 2nd WR position behind Terry McLaurin. He’s a potential sleeper that can be had very late in fantasy drafts this season.