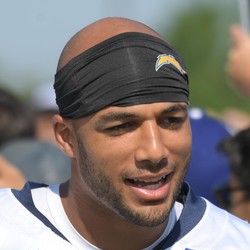 Ekeler is a very strong RB2 option in Week 17 against a weak Chiefs run defense.

ESPN's Adam Schefter reports Austin Ekeler and the Chargers have come to terms on a four-year, $24.5 million contract.

Schefter adds that the deal includes $15 million guaranteed. The 24-year-old back made the most of his opportunity during Melvin Gordon's holdout last Fall. For the season Ekeler compiled 92 receptions and 11 total touchdowns. It was reported earlier this week that Gordon is planning to test the free agent market. He will now have to as the Chargers are moving forward with Ekeler as their guy.

Deposit $10 at a DFS partner site you have NOT played at and get a FREE 6 Month HOF Subscription!
Claim Offer
Who Should I Start?
Most Accurate Experts
for Austin Ekeler
Consensus Rankings
View All Rankings