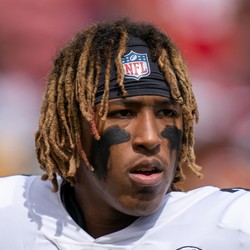 He's a bigger back who was extremely productive for Kentucky, though I believe a lot of it came down to sheer volume. A lot of his weight comes from the top half of his body, which is opposite from someone like Saquon Barkley. Snell is a downhill runner who is willing to throw his body at a defender like a battering ram, always falling forward, but he's not going to create yards on his own. He looked like he was running in slow motion at the NFL Combine, something that doesn't exactly translate to most offenses in the NFL today.

Pittsburgh Steelers running back Benny Snell Jr. carried the ball 18 times for 91 yards and a touchdown in a 28-10 loss to the Ravens in Week 17.

Snell was the lone bright spot on a dismal day for the Pittsburgh offense. The rookie running back finishes his debut season with 426 yards and two touchdowns. Snell should open the 2020 season as James Conner's chief backup.