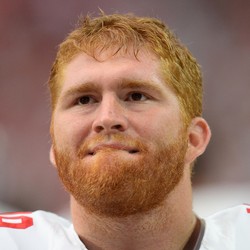 Bruce Miller was arrested Monday morning for an alleged assault of two men while intoxicated. He reportedly is being charged with battery, assault with a deadly weapon, aggravated assault, and elder abuse.

This is his second run-in with the law as a 49ers and the team made an immediate statement by cutting the fullback turned tight end. No word on the punishment yet, but it's hard to imagine Miller playing anytime soon.