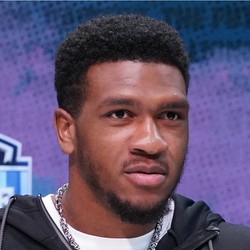 They found ways to get the ball into his hands, whether it be slants, screens, or reverses. He's a big guy, not going to be tackled very easily. His best attribute is his ability to break tackles, as he maintains great balance while absorbing hits. He doesn't have much suddenness and isn't overly quick, so he's not going to gain much separation, but rely on winning contested catches and breaking tackles. He does do a good job with stutter steps and hand movements to sell his routes, as well as understanding when to make his break as the defender flips his hips. He does appear to run a near full route tree. His quarterback play was not good. He's not likely to be a starter right away given his Day 2/3 projection, but should an injury arise on the depth chart, he can contribute.