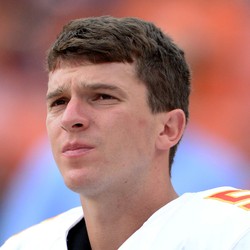 Cairo Santos has been released by the Titans

Cairo Santos has been released by the Titans after missed all four of his field-goal attempts in Sunday's Week 5 loss to Buffalo.

Santos had a disastrous day and cost the Titans a chance at victory. The Titans have decided to move on from Santos after this disastrous outing and will look to sign a kicker this week. Santos was 4-for-9 from field goal range with 12 extra points made this season.

Deposit $10 at a DFS partner site you have NOT played at and get a FREE 6 Month HOF Subscription!
Claim Offer
Who Should I Draft?
Most Accurate Experts
for Cairo Santos
Consensus Rankings
View All Rankings
Do Not Sell
Are you looking to contact Customer Support about a subscription or account related question?
Yes
No, I'm a California resident looking for the California Consumer Privacy Act form