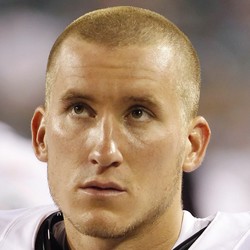 Kicker Caleb Sturgis is being released by the Los Angeles Chargers, according to NFL insider Adam Schefter on Twitter.

Sturgis has been bothered by a quadriceps injury and has been dreadful when on the field, missing six of his 15 extra point tries on the season, including two more in Sunday's win over the Seahawks. Rookie kicker Michael Badgley is still on the Los Angeles practice squad and is likely to be promoted to replace Sturgis.

Deposit $10 at a DFS partner site you have NOT played at and get a FREE 6 Month HOF Subscription!
Claim Offer
Most Accurate Experts
for Caleb Sturgis
Consensus Rankings
View All Rankings
Do Not Sell
Are you looking to contact Customer Support about a subscription or account related question?
Yes
No, I'm a California resident looking for the California Consumer Privacy Act form