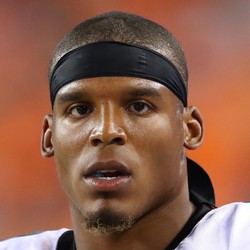 Cam Newton was released by the Panthers on Tuesday.

As expected, Newton was officially released by the Panthers on Tuesday. It was reported that Newton passed a physical on Monday, and both his shoulder and foot checked out fine. The 31-year-old quarterback will try to prove he has something left in the tank. Newton threw for 29,041 yards with 182 touchdowns and 108 interceptions across nine seasons as a Carolina Panther. The former NFL MVP will become an unrestricted free agent and look to latch onto another team this offseason.

Deposit $10 at a DFS partner site you have NOT played at and get a FREE 6 Month HOF Subscription!
Claim Offer
Most Accurate Experts
for Cam Newton
Consensus Rankings
View All Rankings