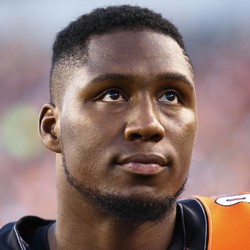 Carlos Dunlap leads the Bengals to their second win

Carlos Dunlap had a monster outing in 33-23 win over the Browns, tallying four solo tackles, one assisted tackle, 2.5 TFLs, 2.5 sacks, three QB hits, one pass defended, and one forced fumble.

Dunlap showed troubling signs to begin his tenth year in the league, amassing one sack over his first seven games and missing two games to injury. Over his last seven games, though, he reminded us just how dominant he could be by recording eight sacks and 16 TFLs. Dunlap will be a key veteran presence for a team trying to claw its way out of the AFC North basement next year.