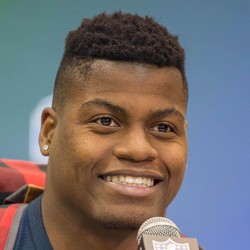 2017 third-round wide receiver Carlos Henderson has been suspended for Week 1 by the NFL for violating NFL Policy and Program for Substances of Abuse. Henderson was already in hot water with the Broncos for failing to show up for training camp and this one-game ban certainly won't help his chances of competing for a roster spot if he were to report.

John Elway used 2018 picks on Courtland Sutton and DaeSean Hamilton, who will slot behind Demaryius Thomas and Emmanuel Sanders. It was already reported that Henderson had long odds to even make the roster, so he's well off the fantasy radar for 2018 and could be close to washing out of the league already.