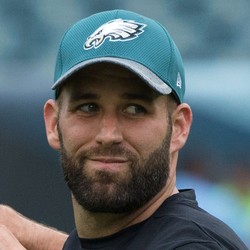 Chase Daniel completed one of four pass attempts for nine yards in the Bears’ 17-7 loss to the Rams on Sunday.

Daniel got into the game with just a few minutes on the clock thanks to a hip injury suffered by Mitch Trubisky. It's possible Daniel sees playing time moving forward even if Trubisky is healthy. The Bears have gone 1-5 over the last six games, and it's becoming more and more clear Trubisky isn't the future of the franchise. Stay tuned.