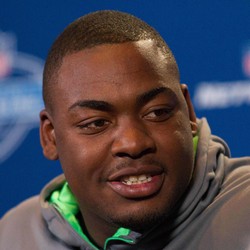 Chris Jones and the Chiefs are working on a long-term deal.

Jones was given the franchise tag in mid-March as both sides look to agree on a long-term contract. “The deadline to get a deal done is July 15. So there’s a lot of time to continue dialogue and to work on something with Chris, but we certainly are going to work to retain him, not just for next year, but for the future," said Chiefs GM Brett Veach. The 25-year-old has been dominant for the Chiefs, recording 24.5 sacks in his last two seasons. The Chiefs will look to lock up their star-pass rusher and have till July 15th to agree on a deal. Jones is a strong fantasy option in IDP league formats.