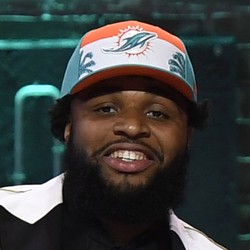 Many believed that Wilkins should have come to the NFL last year, but he chose to stay at Clemson for one more year. My issue with Wilkins is that he can easily be directed in the direction a lineman wants him to go in the run-game. Wilkins is definitely a better pass-rusher than run-stuffer, but we also must remember that he was surrounded by tons of playmakers on that defensive line. He does a good job of getting his hands up when he can't get to the quarterback. I'd prefer to see him as a defensive end in a 3-4 defense rather than an interior lineman. His Combine performance was mediocre.

Christian Wilkins goes to Miami Dolphins at No. 13

With the 13th pick in the 2019 NFL Draft, the Miami Dolphins selected Clemson DT Christian Wilkins.

Wilkins is one of a number of Clemson defensive lineman expected to go early in this draft, with fellow interior lineman Dexter Lawrence expected to go and defense end Clelin Ferrell going fourth overall to the Oakland Raiders. At 6-foot-3, 315 pounds, Wilkins has ideal size for the position, and his quickness at the point of attack is considered to be his strength.