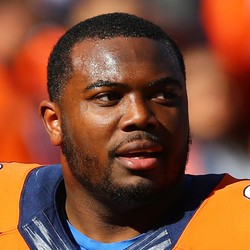 C.J. Anderson works out for Texans

C.J. Anderson is working out with the Texans on Tuesday, Tom Pelissero reports.

Anderson appeared in two games for the Lions before being released due to middling results. The veteran back was an integral part of the Rams’ Super Bowl run last season, shouldering a heavy load with Todd Gurley banged up. He’s still capable of meaningful contributions, but he’ll likely just be a depth add if he signs with Houston, as the tandem of Carlos Hyde and Duke Johnson have been productive through three games.

Deposit $10 at a DFS partner site you have NOT played at and get a FREE 6 Month HOF Subscription!
Claim Offer
Most Accurate Experts
for C.J. Anderson
Consensus Rankings
View All Rankings