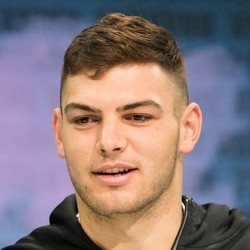 Cole Kmet isn't exactly my favorite TE prospect of all time, but he lands in a beautiful spot here in Chicago. The TE is incredibly important to this offense and Kmet will start day one. It might not equate to much fantasy relevancy right out of the gates, but he's going to see a significant amount of work sooner rather than later.

The Chicago Bears have selected tight end Cole Kmet with the No. 43 overall pick in the 2020 NFL Draft.

The Chicago Bears finally find their long term answer at the tight end position. Jimmy Graham will likely keep Cole Kmet to a rotational role as a rookie, but he has the talent to win the snap battle as the season wears on. The most complete tight end in the 2020 NFL Draft, Kmet has plus receiving upside, but his strength as a blocker is what has kept him the consensus top tight end in the class. Cole Kmet projects as a borderline TE1 from 2021 onward.

(2020)
View Full Schedule
Who Should I Draft?
Most Accurate Experts
for Tight Ends
Do Not Sell
Are you looking to contact Customer Support about a subscription or account related question?
Yes
No, I'm a California resident looking for the California Consumer Privacy Act form