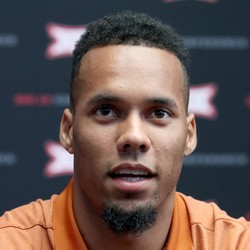 Collin Johnson went earlier than I projected him to go with his injury concerns and he lands in Jacksonville with a pretty solid WR corps. He's unlikely to be anything more than a Red Zone package type of player right away though. He could develop into more, but the Jaguars are going to be looking at other players with higher draft capital before him.

A four-year player for the Texas Longhorns, Johnson was the 165th overall pick of the Jacksonville Jaguars. He joins an impressive group of receivers, including D.J. Chark, Laviska Shenault Jr., Dede Westbrook, and Chris Conley. Johnson stands at an impressive 6-feet-6 and may be used as a red-zone weapon for Gardner Minshew this season. He’s just a deep dynasty stash at this point as he works his way up the Jaguars depth chart.