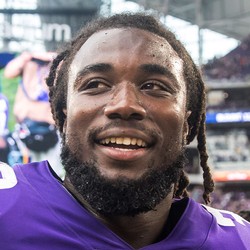 It turns out Gary Kubiak is very good for a run-game. Cook took his game to another level in 2019, finishing as the No. 5 running back despite missing two games. Not only did he total 18-plus carries in eight games, but he also ranked third in yards per route run among running backs. With Stefon Diggs gone, we could see him highlighted even more in the passing game, though Justin Jefferson will eat some of them. Cook also led the league with 21 carries inside the five-yard-line. Health has always been a question mark with Cook, but when healthy, he's easily a top-10 back.

Dalvin Cook will participate in the Vikings off-season program, while waiting on a new contract.

Cook is entering the final year of his rookie contract and is looking to secure a new deal with the Vikings. The 24-year-old said he's the NFL's best running back in early April. "The things I do coming out of the backfield, the things I do between the tackles, I block, I pretty much do it all," said Cook. With Christian McCaffrey signing an extension to become the highest paid RB in NFL history, look for Cook to command top-dollar. Injuries have derailed Cook's first two campaigns of his career, but the 24-year-old had a career-season in 2019. He logged 250 carries for 1,135 yards and 13 touchdowns across 14 games. Cook is currently fifth among all running backs in the expert consensus rankings.

Deposit $10 at a DFS partner site you have NOT played at and get a FREE 6 Month HOF Subscription!
Claim Offer
Who Should I Draft?
Most Accurate Experts
for Dalvin Cook
Consensus Rankings
View All Rankings
Do Not Sell
Are you looking to contact Customer Support about a subscription or account related question?
Yes
No, I'm a California resident looking for the California Consumer Privacy Act form