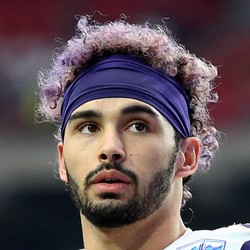 Dante Pettis on the roster bubble

Matt Barrows of the Athletic reports that Dante Pettis is on the roster bubble following a very disappointing 2019 season. Deebo Samuel and Kendrick Bourne will return from last seasons Super Bowl team, likely along with 2019 third round selection Jalen Hurd who missed his entire rookie season with multiple injuries. In this most recent draft the 49ers selected Brandon Aiyuk in the first round, and then Juan Jennings in the seventh round. The 49ers also have Trent Taylor, Richie James and veteran Travis Benjamin under contract for the upcoming season.

A second round pick in 2018 Pettis had a relatively strong rookie season catching 27 passes for 467 yards with five touchdowns. However, in his second season he caught only 11 passes for 109 yards. His total snap count in his first two seasons dropped from 452 to 313. Pettis has seemingly fallen out of favour with the 49ers organization, and fans should not be surprised to see him depart the Bay Area this summer.

Deposit $10 at a DFS partner site you have NOT played at and get a FREE 6 Month HOF Subscription!
Claim Offer
Who Should I Draft?
Most Accurate Experts
for Dante Pettis
Consensus Rankings
View All Rankings
Do Not Sell
Are you looking to contact Customer Support about a subscription or account related question?
Yes
No, I'm a California resident looking for the California Consumer Privacy Act form