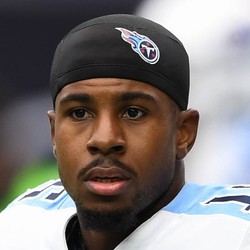 Darius Jennings inks a deal with the Chargers

Jennings got his first NFL opportunity back in 2015 with the Cleveland Browns. He didn’t play in 2016, but has played the last three seasons with the Titans. He was primarily used as a return man in Tennessee, and in 2018, he led the NFL with a 31.7-yard kickoff return average. With all the weapons on offense already in place in Los Angeles, he’ll likely be utilized in a similar special teams role with the Chargers.