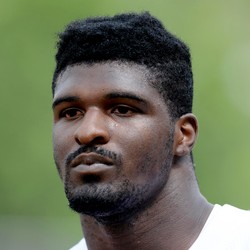 Dee Ford's absence represents an upgrade to Marshawn Lynch and Travis Homer upside for this contest. Lynch and Homer are expected to split carries, with Homer and Robert Turbin functioning as the receiving backs. The 49ers defensive front is still strong without Ford, but his absence has been noticeable in recent weeks. Russell Wilson also gets an small upgrade with Ford out, as he should see an increase in time to throw before being pressured.