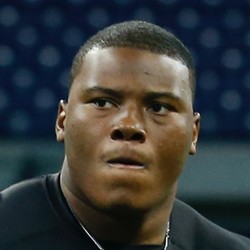 He doesn't look like he weighs 318 pounds. He's very quick off the ball. LSU decided to double him a lot. He's very fast off the ball, that's where he wins, as he's not a bully that'll just continue shoving an interior lineman back. Knows where the play is, gets his hands up most of the time, though there are times where he'll put his head down and lose track of the play. Three-tech. Hands are quick on the first step. Teams show a lot of respect for him. Has a good motor, doesn't give up on plays. Rock-solid prospect who should contribute Day 1.