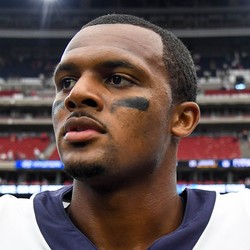 Let's be clear: Losing your No. 1 receiver (DeAndre Hopkins) that you targeted nearly 10 times per game is going to hurt production, especially when he was the type of receiver you could throw the ball up to in one-on-one situations and expect him to win. The Texans now have Will Fuller, Brandin Cooks, Randall Cobb, Kenny Stills, and Keke Coutee as his primary receivers. That's a list complied of speed and slot... that's it. Watson might be running more than ever in 2020, which is very appealing to fantasy owners, but his efficiency through the air is going to come down. We've never seen Watson without Hopkins, so he comes with an additional level of concern that you don't want when selecting a quarterback in the top six rounds.

Several league executives believe it will be Houston Texans QB Deshaun Watson that signs the next quarterback mega-extension.

Both Watson and Chiefs QB Patrick Mahomes had their fifth-year options picked up by their respective teams, and it’s only a matter of time before both quarterbacks get mega-extensions. They’re both likely to receive huge paydays, but league execs believe Watson will receive an extension first due to the Texans sense of urgency after making LT Laremy Tunsil the highest-paid offensive lineman in the NFL. We’ll see if the Texans can sign Watson to a long-term mega contract extension prior to July 15.

Deposit $10 at a DFS partner site you have NOT played at and get a FREE 6 Month HOF Subscription!
Claim Offer
Who Should I Draft?
Most Accurate Experts
for Deshaun Watson
Consensus Rankings
View All Rankings
Do Not Sell
Are you looking to contact Customer Support about a subscription or account related question?
Yes
No, I'm a California resident looking for the California Consumer Privacy Act form