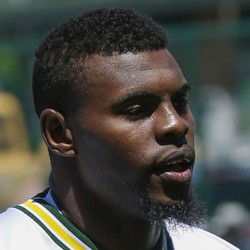 Devante Mays catches two passes in loss to the Eagles

Devante Mays rushed five times for negative one yard and caught two passes for 15 yards as the Jaguars lost to the Eagles in their second preseason game.

Mays was not very impressive on the ground for the Jaguars on Thursday. The 25-year-old has eight games of NFL experience to his name, rushing for just one yard on four attempts during the 2017 season with Green Bay. If Mays does make the team he will not be fantasy relevant.