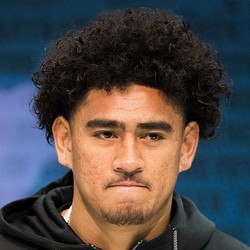 PSA: I have not watched tape on Devin Asiasi, which results in his incomplete ranking here. He lands in NE as a third-string TE though and could be fantasy relevant down the road. He's unlikely to make an immediate impact though, but I'll know more when I have the chance to evaluate his tape and finalize his grade.

The New England Patriots have selected tight end Devin Asiasi with the No. 91 overall pick in the 2020 NFL Draft after acquiring the pick from the Las Vegas Raiders.

Devin Asiasi is a talented tight end who projects as a future starter for the New England Patriots. Bill Belichick liked him enough to trade up to land him, something that bodes well for his potential to get on the field and log heavy snaps early. He still has work to do in the blocking department, but has shown enough in the run game to be viewed as an asset. He is already a solid receiver, but could become a potentially dominant one with some coaching. The Patriots found themselves a steal in the third round. Asiasi will open his career as a TE2 option in fantasy, but is in the right scheme to become a TE1 option by his third year in the league.

(2020)
View Full Schedule
Who Should I Draft?
Most Accurate Experts
for Tight Ends
Do Not Sell
Are you looking to contact Customer Support about a subscription or account related question?
Yes
No, I'm a California resident looking for the California Consumer Privacy Act form