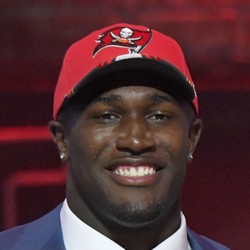 Plays with an attitude you want for your inside linebacker. He always seems to be around the ball, no matter where on the field. LSU used him to blitz quite often, so it's another plus he has to his game. There are shades of what can be a dominant linebacker in the NFL, chooses the correct hole, tracks the ball well, and finishes his tackles, though there were moments on tape where he showed concern, too. There were times during the Auburn game specifically where he looked to be gassed in the second-quarter and he looked terrible. There's more good than bad, however. His 4.42-second 40-yard dash essentially solidified him as the top linebacker off the board.

White has been an IDP force since returning from an early season injury, and will look to keep the good times rolling against the Lions. One of the more athletic sideline to sideline linebackers, White can also rush the passer, and make stops in the backfield. White should be trusted as an LB1 despite the illness.