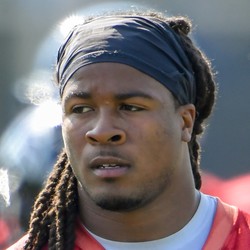 Devonta Freeman tells Buccaneers 'reach out to me directly'

Free Agent RB Devonta Freeman told the Buccaneers to "reach out to him directly" to negotiate a deal.

The Buccaneers were reportedly interested in bringing in the veteran RB, but only "if the price tag was reasonable." "A number of teams are interested, but we can’t negotiate through the media, the Buccaneers can reach out to me directly," said Freeman. Multiple teams have been interested in signing Freeman, but have been unable to reach a deal. The 28-year-old ran for 657 yards on 184 carries and hauled in 59 catches for 410 yards with six touchdowns across 14 games for the Falcons in 2019. Freeman will continue to wait it out as he looks to secure a contract with an NFL team this off-season.

Deposit $10 at a DFS partner site you have NOT played at and get a FREE 6 Month HOF Subscription!
Claim Offer
Who Should I Draft?
Most Accurate Experts
for Devonta Freeman
Consensus Rankings
View All Rankings
Do Not Sell
Are you looking to contact Customer Support about a subscription or account related question?
Yes
No, I'm a California resident looking for the California Consumer Privacy Act form