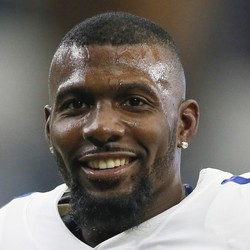 Dez Bryant on Twitter stated that “Dak and myself just finished a great workout session... picked up where we left off.”

Bryant has not played since tearing his Achilles back in November of 2018 while participating in his first practice with the Saints. During Bryant’s time with the Cowboys when he was healthy, Bryant and Prescott played very well together. They combined for 119 receptions for 1,634 yards and 14 touchdowns, in 29 games between 2016-2017. Bryant is hoping to return to the league. If you have an open roster spot in a deep dynasty league, Bryant is worth a speculative add to see if he signs with someone.

Deposit $10 at a DFS partner site you have NOT played at and get a FREE 6 Month HOF Subscription!
Claim Offer
Who Should I Draft?
Most Accurate Experts
for Dez Bryant
Consensus Rankings
View All Rankings
Do Not Sell
Are you looking to contact Customer Support about a subscription or account related question?
Yes
No, I'm a California resident looking for the California Consumer Privacy Act form