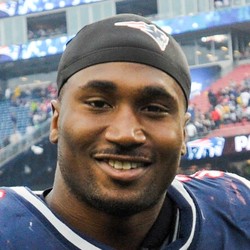 Dion Lewis catches one pass in loss on Sunday

Dion Lewis caught his only target for six yards on Sunday in Tennessee's AFC Championship loss to the Chiefs by a 35-24 score.

Lewis saw his role on the Titans disappear this season with the emergence of Derrick Henry who became a workhorse back for the team. It would not be surprising if the team decides to move on from Lewis who should find another job in the league as a third-down back if that does happen.

Deposit $10 at a DFS partner site you have NOT played at and get a FREE 6 Month HOF Subscription!
Claim Offer
Who Should I Start?
Most Accurate Experts
for Dion Lewis
Consensus Rankings
View All Rankings