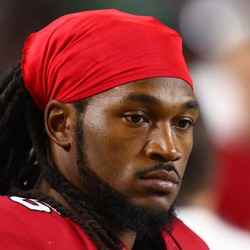 D.J. Swearinger Sr. is signing a one-year, $1.1 million contract with the Saints.

Swearinger originally signed with the Saints back on Week 15 of the 2019 season. The team ultimately decided to re-sign him to a one-year deal. Swearinger totaled 50 tackles across nine games for the Raiders/Cardinals/Saints last season. He will provide the Saints depth at safety and is an option in deep-league IDP formats only.