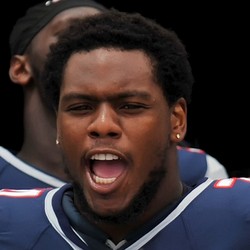 One day after being carted off the field during practice it has been confirmed that Dominique Easley has a torn ACL and is done for the season.

This is a huge blow for the Rams defense. Easley played a big part in the rotation along the defensive and also played a big role in the effectiveness of Aaron Donald by demanding attention with his play. The Rams have depth across the defensive front but they will now have to get creative with their rotations in order to keep players fresh.