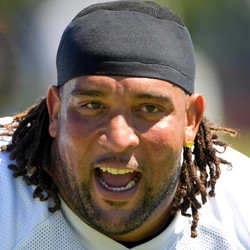 Donald Penn wants to play next season, open to returning to Redskins

Free agent OL Donald Penn told Josina Anderson that he is interested in playing football next season, and is open to returning to the Washington Redskins.

The 14-year veteran signed a one-year deal with Washington in 2019 after it was known that OT Trent Williams would sit out the season. At 36 years old, Penn still believes he has more in the tank. We’ll see if the Redskins, or any other team, gives him a shot to prove himself in 2020.