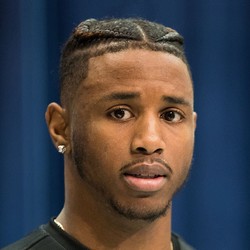 DPJ didn't exactly see the NFL Draft play out for him the way he would have hoped, but he landed in a decent spot for fantasy football. The Cleveland Browns have very little depth behind OBJ and Jarvis Landry, so there's a clear path to playing time. While the Browns are rarely going to be in 3-WR sets, DPJ should come onto the field in those instances. He may have the most use as an OBJ insurance policy though in case of an injury.

WR Donovan Peoples-Jones, the 187th overall pick in the 2020 NFL Draft, has officially signed his four-year rookie deal with the Cleveland Browns.

Peoples-Jones will get an opportunity to compete for snaps in Cleveland behind Odell Beckham Jr. and Jarvis Landry. The 3rd WR position is very much up for grabs between guys like Rashard Higgins, Damion Ratley, and Peoples-Jones. In his career at Michigan, he combined for 103 receptions, 1,327 yards, and 14 TDs. While his production doesn’t wow anybody, he’s a physical specimen with great ball skills and has a chance to become a very good receiver at the next level.