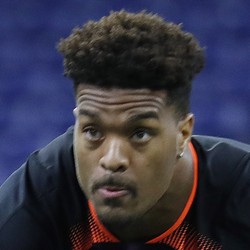 He's a much better pass-rusher than he is run-stopper, which likely comes down to his smaller frame at 6-foot-3 and 286 pounds. He does have a good motor because of that. He's got a quick first step and swim move that'll help get to the quarterback, but he'd be a liability against the run. While watching him, I wondered if it would make sense for him to shed a few pounds and become a defensive end. He lost five pounds from his listed weight at the NFL Combine, too.