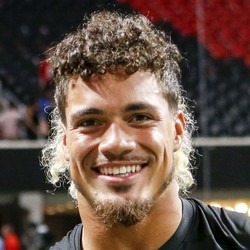 Duke Riley hasn't rebound with playing time as of Week 11

Atlanta linebacker Duke Riley has now been third in snap counts among the main three for five straight games. In this contest, he did manage to record six combined tackle, he still did not top 40% of the snaps allowed on defense.

Dynasty wise IDP owners have had to move on by now. But the IDP production can be deceiving, he is a high-risk option for the rest of the season. The lack of time on the field will eventually catch up to his production in IDP.