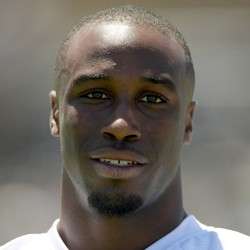 Elijah Hood gained 71 yards on eight rushes and caught two of three targets for 14 receiving yards during Thursday's 31-12 preseason loss to the Falcons.

Hood is going to have a tough time making the Jaguars final roster but the 23-year-old back out of North Carolina helped his cause with a strong preseason game. Hood is a 230-pound bruiser and could be kept on the team for short yardage situations.