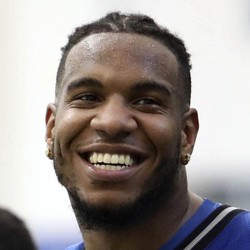 At his season ending press conference Colts general manager Chris Ballard said the team would “probably move on” from Eric Ebron when asked about the tight end’s expiring contract. Ebron played two seasons with the Colts, appearing in 24 games for the club, catching 97 passes for 1,125 yards with 16 touchdowns. Ebron saw 52 targets in 2019, down from 110 the year prior.

Until Ebron finds a new home any potential departure would have the most immediate impact on Jack Doyle and Mo Alie-Cox. In the five games Ebron missed to close out the season Doyle caught only 13 passes on 30 pass attempts for 144 yards with one touchdown. Mo Alie-Cox caught only eight passes all season. Despite the vacated snaps and targets left by Ebron there does not seem to be much fantasy upside for Jack Doyle in 2020.

Deposit $10 at a DFS partner site you have NOT played at and get a FREE 6 Month HOF Subscription!
Claim Offer
Most Accurate Experts
for Eric Ebron
Consensus Rankings
View All Rankings