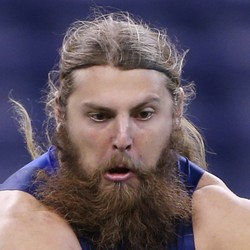 Eric Tomlinson signs a deal with the New York Giants

TE Eric Tomlinson announced on Instagram that he has signed a deal with the New York Giants.

The run-blocking specialist lands back in New York after playing games for three teams in 2019, Oakland, New England, and the Giants. Prior to last season, Tomlinson had played three seasons with the Jets, only catching 16 balls for 193 yards and one touchdown. He’ll be a nice addition to what the Giants are trying to do on offense that features star RB Saquon Barkley.

Deposit $10 at a DFS partner site you have NOT played at and get a FREE 6 Month HOF Subscription!
Claim Offer
Who Should I Draft?
Most Accurate Experts
for Eric Tomlinson
Consensus Rankings
View All Rankings
Do Not Sell
Are you looking to contact Customer Support about a subscription or account related question?
Yes
No, I'm a California resident looking for the California Consumer Privacy Act form