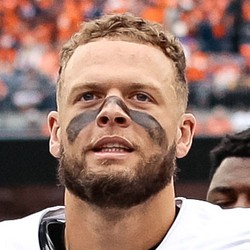 Erik Harris grabs his second pick-six of the season

Erik Harris recorded two total tackles, three pass breakups, two INTs, and a TD in a 26-24 win over the Chargers.

Harris' picks came on the first two Charger's drives, and he would have had had a third had his teammate not lined up offsides in the second quarter. His two best fantasy weeks, though, have come in games where he's had an interception returned for a TD, so it's a little hard to rely on that production.