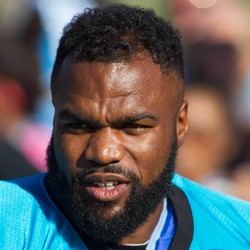 The Carolina Panthers announced that running back Fozzy Whittaker has been placed on Injured Reserve after tearing his ACL last week in OTA's.

Whittaker's season is officially over. The 29-year-old veteran only played 46 offensive snaps for the Panthers last season and was unlikely to have much of an impact behind C.J. Anderson and Christian McCaffrey. Assuming he makes a full recovery next year, Whittaker will be a free agent, but he holds no fantasy value.