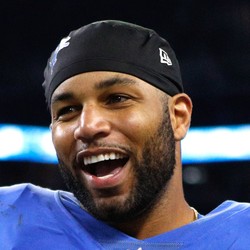 Closing in on the age of 32, Tate is nearing the end of his NFL career. Sure, he's a smaller receiver, and they do tend to hold up better than the big-bodied receivers, but Tate has taken a beating over the middle of the field while racking up yards after the catch. Now competing with Sterling Shepard, Darius Slayton, Evan Engram, and Saquon Barkley for targets, he's a very low upside fantasy receiver. If he remains healthy, he'll likely finish as a top-40 fantasy receiver, but he's not going to be someone who thrusts you to a fantasy championship.

Giants wide receiver Golden Tate caught five of his eight targets for 68 yards and a touchdown in Sunday's loss to the Philadelphia Eagles.

Tate finishes a solid season with the Giants with 49 receptions for 676 yards and six touchdowns after finding the end zone on Sunday. He did, however, miss four games earlier this season for a suspension and another with an ankle injury.

Deposit $10 at a DFS partner site you have NOT played at and get a FREE 6 Month HOF Subscription!
Claim Offer
Who Should I Draft?
Most Accurate Experts
for Golden Tate
Consensus Rankings
View All Rankings
Do Not Sell
Are you looking to contact Customer Support about a subscription or account related question?
Yes
No, I'm a California resident looking for the California Consumer Privacy Act form