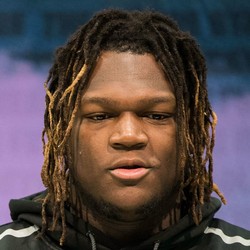 The Tennessee Titans have selected offensive lineman Isaiah Wilson with the No. 29 overall pick in the 2020 NFL Draft.

Isaiah Wilson is a shrewd pick for the Tennessee Titans. He may not have been on the first round radar for some, but was constantly discussed as someone that NFL teams were higher on than the media. Wilson may start his career at guard, but projects as Jack Conklin’s eventual heir at right tackle. Strong in the run game, Wilson just needs to clean up his technique in pass protection to make the move to the outside. He will help soften the blow of losing a talent like Conklin.