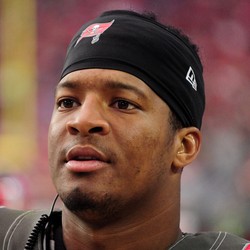 It was the best of times, it was the worst of times for Winston in 2019. Although he led the NFL in passing yards with 5,109, he also threw 30 interceptions and completed barely 60% of his passes. Now a backup to Drew Brees, Winston could become extremely interesting with an injury, though the presence of Taysom Hill might negate that potential. There's zero reason to draft Winston in redraft leagues, but his value in dynasty formats would obviously get an enormous boost if he takes over after Brees inevitably retires next season.

Saints QB Jameis Winston underwent off-season LASIK eye surgery and now has “no blurriness” and his “depth perception has increased.”

Winston told reporters, “I can read license plates. I can read street signs. I think the precision in the vision is the biggest difference.” Winston seems serious about cleaning up his game as he joins the Saints on a one-year deal. Last season with the Buccaneers, he threw for a career-high 33 TDs, but that was coupled with another career-high, 30 INTs. Winston has had issues with his vision since his college days, and after his record-setting 2019, figured the time was right to hit the reset button on his future. Winston has shed weight, added muscle, corrected his vision, and seems excited to get the opportunity to learn from one of the best to ever play the position in Drew Brees. Look for Winston to become a starter again at some point in his career, whether for the Saints or another organization.

(2020)
View Full Schedule
Who Should I Draft?
Most Accurate Experts
for Jameis Winston
Do Not Sell
Are you looking to contact Customer Support about a subscription or account related question?
Yes
No, I'm a California resident looking for the California Consumer Privacy Act form