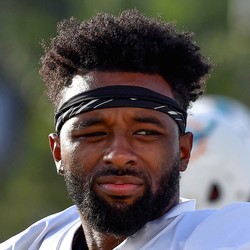 Landry is seemingly always undervalued and it's risky doing it again, but he did have hip surgery this offseason, and we are expecting much more out of Odell Beckham. Not just that, but the addition of Austin Hooper means they're going to target the tight end position a lot more under Kevin Stefanski. It just doesn't feel likely that Landry will see the 138 or 149 targets he did over the last two seasons. Still, here's a fun fact: There have been three wide receivers who've been top-24 fantasy options in each of the last five seasons. Julio Jones, Mike Evans, and Landry.

Jarvis Landry (hip) ‘ahead of schedule’ with rehab from surgery

Browns WR Jarvis Landry told members of the media on Wednesday that he is “ahead of schedule” in his rehab from hip surgery he had back in February.

“The rehab process is going great,” said Landry. “Right now I’m a little bit ahead of schedule. Most important thing is taking it day by day and being healthy for the season.'' Landry added that he hopes to take the field sometime in August and be ready to go for the season opener. He has never missed a single game in his entire six-year NFL career and he prides himself on that. Landry also talked about how he and Odell Beckham Jr. (core muscle) have pushed each other during their rehabs and that they “motivate each other to make a strong comeback.” Landry is currently ranked #30 in the FantasyPros expert consensus rankings. He gets a bit of an uptick in PPR leagues as well, as he’s averaged 94 receptions in his six seasons in the NFL.

Deposit $10 at a DFS partner site you have NOT played at and get a FREE 6 Month HOF Subscription!
Claim Offer
Who Should I Draft?
Most Accurate Experts
for Jarvis Landry
Consensus Rankings
View All Rankings
Do Not Sell
Are you looking to contact Customer Support about a subscription or account related question?
Yes
No, I'm a California resident looking for the California Consumer Privacy Act form