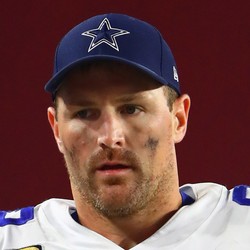 Cowboys tight end Jason Witten caught four of his five targets for 36 yards and a touchdown in Sunday's win over the Los Angeles Rams.

Witten now has two touchdowns in his last three games after going failing to find the end zone in nine consecutive games. He is very touchdown-dependent in fantasy at this point in his career, though, and the Philadelphia secondary usually gives up most of their big plays to wide receivers and not opposing tight ends.