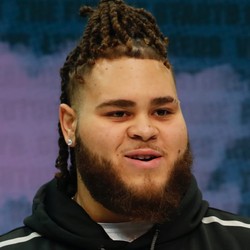 Extends his arms very well, gets a punch in there. He isn't timid, not afraid to engage someone. Has a very good understanding of where the play is supposed to go and will get to the spot he needs to be while positioning himself the direction he needs to be. Sinks his hips low on the pass-rush, doesn't give too much ground. He doesn't play with the mean streak that some would want as an O-lineman, though. Body positioning is a big strength of his game. Defenders can slide off blocks a bit easier when he's run-blocking and going downhill. If there's a negative, it's that he's almost built like a guard, but has the height of a tackle.

The contract is fully guaranteed for the dominant offensive tackle out of Alabama. Wills will also receive an $11.889M signing bonus. As with all first-round picks, his deal comes with a fifth-year team option. Wills becomes the third top-10 pick to sign his rookie deal and he will likely be called upon early in his career to protect QB Baker Mayfield.