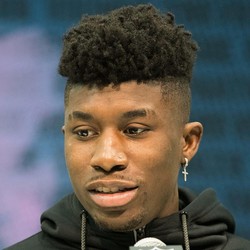 Really good backpedal, moves feet seamlessly. He looks more comfortable when he's in man coverage than when he's in zone. Very long arms, uses them well when in press coverage. Was used to cover both on the perimeter and slot, though primary a perimeter player. He tackles bigger than the 183 pounds he's listed at. He doesn't have long speed, fast receivers will blow by him if he doesn't get his hands on them. Doesn't overreact to studder steps in routes, maintains balance well.