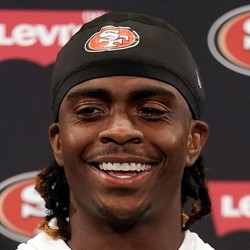 Jerick McKinnon (knee) to finally become a big part of the 49ers offense?

San Francisco 49ers GM John Lynch is “cautiously optimistic” that RB Jerick McKinnon will play a big part in the 49ers offense in 2020.

San Francisco made a splash by signing McKinnon to a four-year, $30M deal on the first day of free agency ahead of the 2018 season. Two years later, and he’s yet to play a snap for the 49ers after having ACL reconstruction surgery. “I think there’s always that critical last juncture of a rehab where you go from running straight ahead and even trying to simulate some of the cutting that goes on at that position, specifically,” Lynch said of McKinnon’s progress. “Then, you go play football and it becomes much more reactive. And that’s where he struggled. He’s continued to put in work. There are some positive signs that we’re on a better track.” But the 49ers now have a stable of backs in Raheem Mostert, Tevin Coleman, and Jeff Wilson. Will there be enough opportunities for “Jet” to become fantasy relevant in 2020? Lynch believes he can really help this offense, and here’s what he had to say regarding how the 49ers want to utilize his skill set. “We thought he’d be excellent in terms of (being a receiver out of the backfield) -- really, a tough guy to match up with in space. And our (coaches) are really good about putting our guys in space. So that would be tremendous for us.” He’s a very deep flyer in fantasy leagues at this point until he can show he’s healthy enough to be on the field and make plays for the 49ers.

Deposit $10 at a DFS partner site you have NOT played at and get a FREE 6 Month HOF Subscription!
Claim Offer
Who Should I Draft?
Most Accurate Experts
for Jerick McKinnon
Consensus Rankings
View All Rankings
Do Not Sell
Are you looking to contact Customer Support about a subscription or account related question?
Yes
No, I'm a California resident looking for the California Consumer Privacy Act form