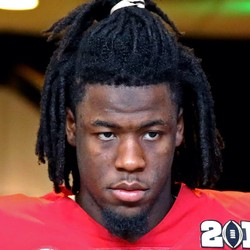 My favorite wide receiver in this draft class. Jeudy is a natural route-runner who can get open at any level on the field and has played against the highest level of competition. If there's any criticism to his game, it's that he will take plays off from time to time when he knows the ball isn't coming his way. He creates an easy target for his quarterback with his elite start/stop ability, but also knows how to twist a defensive back at the right time. He's going to be a stud.

This was a great time for Jerry Jeudy, which solidifies his stock as a top-3 option in Dynasty rookie drafts. Jeudy's ability to create separation with fantastic route-running and release off the line of scrimmage was enough to put him in that top tier. Now, with this recorded speed added on top of it, Jeudy's a likely option to go 1.01.